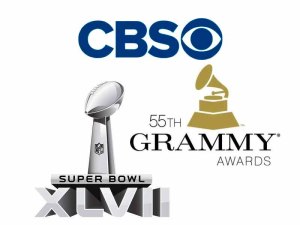 As a follow-up to the last Super Bowl post, I wanted to provide a rundown of the Ads that ran for both Super Bowl XLVII and the 2013 Grammy’s.

A 30 second spot ran for $3.4 million. CBS sold out all the ad spots leading up to the big game.

The Grammy’s followed the tail of the Super Bowl a week later with a smaller audience.

Even in the age of online media, companies are still paying shelling out huge amounts for traditional media outlets.

Simple math reveals that companies paid about $31 per view for the Super Bowl and $35 per view on the Grammy’s.

Super Bowl ads have always been big news, and Anheuser Busch is always at the top of the list of favorites.

They ran this one for Budweiser this year.

Followed by this one for Bud Light Platinum at the Grammy’s, with the help of Justin Timberlake.

And since this blog is about Home Theater and electronics, I’ll end with these ads from Microsoft, Google, and Blackberry.

Why Apple Needs to Create the iWatch »
« Big Game Technology

This site uses Akismet to reduce spam. Learn how your comment data is processed.

An Audio/Video blog for tech nerds and the masses- no secret passphrase required.